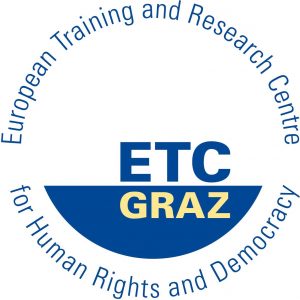 The ETC is a non-profit organisation that commenced operations in October 1999. Its main aim is to conduct research and training programmes in the fields of human rights, democracy and the rule of law in close cooperation with the Karl Franzens University of Graz.

In addition to the focus on research, the ETC also develops and conducts training programmes for civil servants, law enforcement, military forces, the judiciary, as well as for staff of international organisations and NGOs in Austria and abroad.

Since 2003, the ETC has published the manual ‘Understanding Human Rights’ which is now available in 15 languages. The ETC has been involved in numerous research projects, funded by agencies including inter alia the European Commission (coordinator of FP6 projects HUMSEC and PROMISE, and participation in the FP7 projects – MULTIPART and FRAME, as well as the Horizon2020 project ETHOS), EU Fundamental Rights Agency, UNESCO, EIUC, World University Service, Austrian Development Agency, various Austrian ministries including the Federal Ministry for European and International Affairs, various national funding agencies including the Austrian Science Fund and the Anniversary Fund of the Oesterreichische Nationalbank.

Ms Maddalena Vivona is research fellow and project manager at the ETC Graz. She is a law graduate from the Universitá degli Studi di Parma (Italy). Before her employment at the ETC she completed a court internship at the Court of Appeals Graz. Her research interests lie in the field of the prohibition of torture, prison studies, human security and human rights indicators. She has been working at the ETC Graz since 2003, where she managed the FP6 coordination action HUMSEC. She was researcher and cluster manager for the FP7 projects FRAME and MULTIPART, Bringing Home Human Rights and more recently the Horizon2020 project ETHOS. As a project manager she managed the ETC contribution in the project OTM, VICT and ADPOLIS.

Dr Isabella Meier is a research fellow at the European Training and Research Centre for Human Rights and Democracy. She holds a doctorate degree in sociology from the Karl-Franzens-University of Graz. She previously was a research fellow at the University of Graz, at the Institute for Economics and at the Medical University of Graz, Institute for Social Medicine and Epidemiology. In her positions she has acquired extensive knowledge and experience in qualitative and quantitative methods of empirical research. She is a social expert for qualitative fieldwork research at the Austrian National Focal Point of the Fundamental Rights Agency. Her main research interests are fundamental rights, social welfare, gender studies, public health and indicator based measuring of the implementation of human rights. Dr. Meier was and is involved in numerous national and international research projects, including the FP7 project FRAME the Horizon 2020 project ETHOS. She also was responsible for the social fieldwork in the ETCs contribution in the projects OTM and VICT.

Ms Ingrid Nicoletti has been working as a researcher at the ETC Graz since 2013. Her research focuses on human rights at the local level; recent projects include the development of a manual for city administrations on the implementation of effective policies against racism (ECCAR Toolkit for Equality) and a study on hate crime incidents in the Austrian region of Styria. She is also a member of the research team in the Austrian National Focal Point of the Fundamental Rights Agency. Ingrid Nicoletti holds a Master’s degree in Sociology from the University of Vienna and is currently finishing her Law Studies at the Karl-Franzens-University of Graz.

Ms Simone Philipp has worked as humanist and trainer for the ETC since 2008. Her research interests primarily revolve around intersectional discrimination, which she dealt with in several projects. In the project Locating Intersectional Discrimination she explored how intersectional discrimination manifests itself in the lives of those affected, and why judicial practice struggles with adequately treating such cases. In another project, she researched how intersectional disadvantages affect CVs. Simone Philipp also researches freedom of education as well as theoretical approaches to human rights education – whether offers, which help women and girls with a migratory background with their career paths, also adequately address the needs of the target group and whether the way human rights education is conducted in secondary school actually contributes to communicating its goals. As a trainer of human rights education, Simone Philipp works with differing target groups. In particular, she works with children and young adults on children’s rights, civil courage and discrimination; with teachers on didactic approaches to human rights and how they can be used in class; with police officers and judicial officers on human rights-based behaviour; with prison inmates on the prevention of radicalisation. Simone Philipp has authored a wide range of materials and methods for particular target groups.